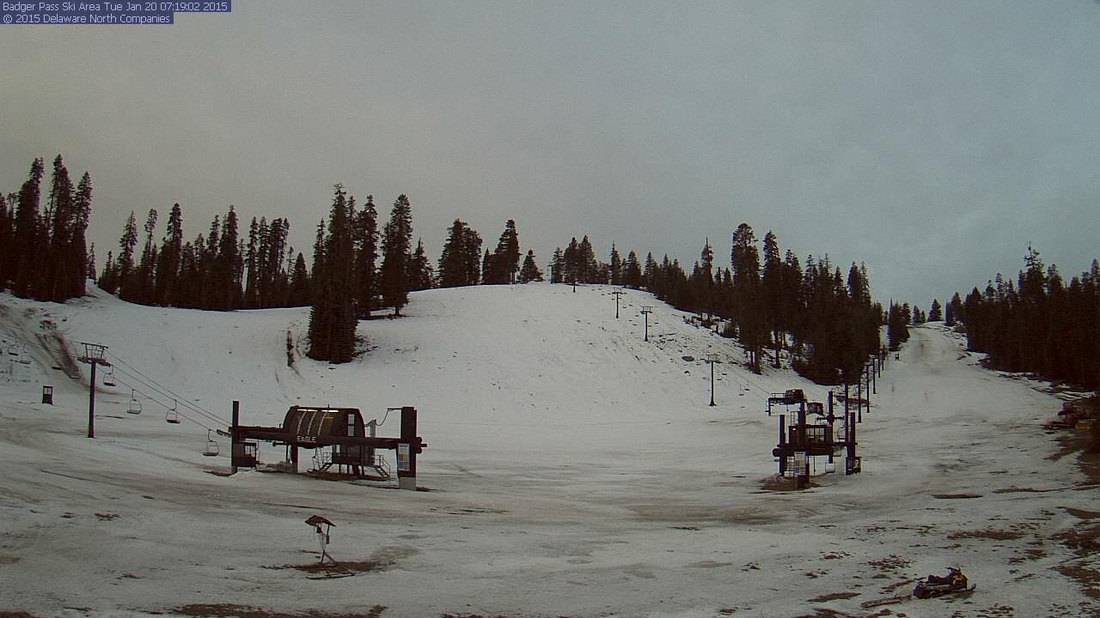 Following the end of the day on Monday, January 19, Badger Pass Ski Area will be temporarily closed until we receive adequate snow cover. This includes the Cross Country ski trails and snowshoe trails. The road to Badger Pass will be blocked at Chinquapin, the turn-off to Badger Pass Road from Hwy 41.

CBS News - SAN FRANCISCO - A pair of Americans on Wednesday completed what had long been considered the world's most difficult rock climb, using only their hands and feet to conquer a 3,000-foot vertical wall on El Capitan, the forbidding granite pedestal in Yosemite National Park that has beckoned adventurers for more than half a century.

Tommy Caldwell and Kevin Jorgeson became the first to "free-climb" the rock formation's Dawn Wall, a feat that many had considered impossible. They used ropes and safety harnesses to catch them in case of a fall, but relied entirely on their own strength and dexterity to ascend by grasping cracks as thin as razor blades and as small as dimes.

The effort took weeks, as the two dealt with constant falls and injuries. But their success completes a years-long dream that bordered on obsession for the men.


The trek up the world's largest granite monolith began Dec. 27. Caldwell and Jorgeson lived on the wall itself. They ate and slept in tents fastened to the rock thousands of feet above the ground and battled painful cuts to their fingertips much of the way.

Free-climbers do not pull themselves up with cables or use chisels to carve out handholds. Instead, they climb inch by inch, wedging their fingertips and feet into tiny crevices or gripping sharp, thin projections of rock. In photographs, the two appeared at times like Spider-Man, with arms and legs splayed across the pale rock that has been described as smooth as a bedroom wall.

Both men needed to take rest days to wait for their skin to heal. They used tape and even superglue to help with the process. At one point, Caldwell set an alarm to wake him every few hours to apply a special lotion to his throbbing hands.

They also took physical punishment when their grip would slip, pitching them into long, swinging falls that left them bouncing off the rock face. The tumbles, which they called "taking a whipper," ended in startling jolts from their safety ropes.


Caldwell and Jorgeson had help from a team of supporters who brought food and supplies and shot video of the adventure.

The 36-year-old Caldwell and 30-year-old Jorgeson ate canned peaches and occasionally sipped whiskey. They watched their urine evaporate into thin, dry air and handed toilet sacks, called "wag bags," to helpers who disposed of them.

There are about 100 routes up the rock known among climbers as "El Cap," and many have made it to the top, the first in 1958. Even the Dawn Wall had been scaled. Warren Harding and Dean Caldwell (no relation to Tommy) made it up in 1970, using climbing ropes and countless rivets over 27 days.

No one, however, had ever made it to the 3,000-foot summit in one continuous free-climb - until now.

The pioneering ascent comes as a result of five years of training and failed attempts for both Caldwell and Jorgeson. They only got about a third of the way up in 2010 when they were turned back by storms. A year later, Jorgeson fell and broke an ankle in another attempt. Since then, each has spent time on the big, blank rock practicing and mapping out strategy.

On this try, as the world watched and followed on Facebook and Twitter, Jorgeson was stalled by a lower section that took 11 attempts over the course of seven days.

"As disappointing as this is, I'm learning new levels of patience, perseverance and desire," Jorgeson posted online. "I'm not giving up. I will rest. I will try again. I will succeed."

Caldwell, of Estes Park, Colorado, is no stranger to El Cap. He has free-climbed 11 different routes and was the first to make such ascents of the Dihedral Wall and West Buttress. He was the third to free-climb the Nose on El Cap. He also made his way up a challenging El Capitan route in fewer than 24 hours - becoming only the second person to do so - only months after accidentally severing his left index finger with a table saw in 2001.

In 2000, Caldwell and three other climbers went to the former Soviet republic of Kyrgyzstan to scale the towering rock walls of its southern mountains. Seventeen days in, they were captured by the Islamic Movement of Uzbekistan. Caldwell shoved a guard over a cliff, and the climbers fled, eventually reaching a Kyrgyz army outpost. The guard survived the fall.

Jorgeson, of Santa Rosa, California, has an impressive list of climbs in the U.S., Europe and South Africa. He works as a climbing instructor and co-founded an advocacy group for the climbers.

Still, the difficulty of the climb wasn't a surprise.

John Long, the first person to climb up El Capitan in one day in 1975, said recently of Caldwell and Jorgeson's free-climb that it was almost "inconceivable that anyone could do something that continuously difficult."

Two rock climbers are steps closer to achieving an unprecedented feat Monday morning. For more than two weeks, they've been working their way up a 3,000-foot wall of granite at Yosemite National Park's El Capitan and have now made it past the most difficult part of the climb, reports CBS News correspondent Ben Tracy.

After a week-long battle with El Capitan's razor thin ledges, 30-year-old Kevin Jorgensen conquered Pitch 15 over the weekend. It's considered one of the toughest sections of the climb.

"Over the course of seven days, I made 11 tries and finally did it, and this is a view I will always remember, but I'm not sad to be moving past," Jorgensen said.


His partner, Tommy Caldwell, made it past Pitch 15 last weekend and has been waiting for Kevin to catch up with him at a section called Wino Tower.

The men are hoping to complete the first-ever free climb of the Dawn Wall, using only their hands and feet to scale a practically flat surface higher than two Empire State Buildings stacked on top of each other. The route is usually climbed by ascending on specialized equipment to inch up the cliff. Caldwell and Jorgeson are climbing the rock itself. The ropes and gear don't help them reach the top, they're simply a protective measure. The rock is so smooth and featureless, the route is one of the most difficult in the world.

The two began their ascent more than two weeks ago but have been trying to conquer this climb for much longer.

"It's taken them years of choreographing the moves, getting strong enough to do each of these moves and sort of getting them down to muscle memory," Outside Magazine senior editor Grayson Schaffer said.

Sunday was a day of rest for both men. Monday, Kevin will start working his way to Caldwell at Wino Tower.

If all goes well, and the men are reunited, they could reach the summit and the history books, by Wednesday night.

Two climbers are daring to climb one of the hardest stretches of granite in the world in Yosemite National Park with very little help.

Tommy Caldwell and Kevin Jorgeson are free-climbing the “Dawn Wall” of Yosemite's El Capitan mountain, which is the steepest half-mile stretch of granite that faces east toward the sun.


If they reach their goal, they're going to make history by being the first to do so without the help of any tools.

Over the course of the climb, which began Dec. 27, they have been sleeping in nylon tents that are attached to the wall at only one point. As of this morning, Day 11, they are about 1,500 feet from the end and are expected to complete all 32 sections of the climb by this weekend.

"If you look at that wall, it looks like glass," said Big Up Productions filmmaker Josh Lowell, who has been filming their climbs for the past six years. "It's really difficult to imagine how anyone could free-climb it."

They've been eating their packed hard-boiled eggs and breakfast sandwiches with salmon and getting caffeine boosts from their flasks of coffee.


The adventurers are able to stay in touch with their loved ones, and perfect strangers, using a cellphone and even hosted a tweet chat Monday, though they're avoiding calls because they want to stay focused on the climb.

"Pretty exciting, um, but it's far from over yet," Jorgeson said in a video released from the sixth day of the climb. 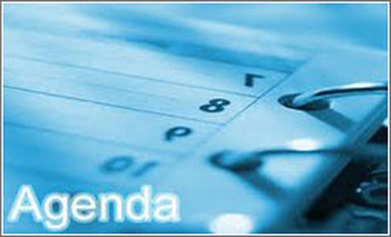 3.       CONSENT AGENDA
NOTE: The Board will be asked to approve all of the following items by a single vote, unless any member of the Board or of the public asks that an item be removed from the consent agenda and considered and discussed separately.
3.1.    Approval of agenda
3.2.    Approval of minutes of the regular meeting, December 10, 2014
4.       Financial reports
4.1.    Monthly approval of warrants  (Action needed)
4.2.    Financial Report
5.       HEARING OF PERSONS WISHING TO ADDRESS THE BOARD

The public may address the Board on any matter pertaining to the school that is not on the agenda.  Unless otherwise determined by the Board, each person is limited to five (5) minutes.  There will be no Board discussion and no action will be taken unless listed on a subsequent agenda.

7.       BOARD MEMBER COMMENTS
8.       STAFF REPORTS
9.       NEXT MEETING DATE
10.   CLOSED SESSION   Personnel/Negotiations/Litigation
NOTE:  The Board will consider and may act upon any of the following items in closed session.  Any action taken will be reported publicly at the end of the closed session as required by law.
10.1.Employee Negotiations (Gov. Code 54957.6)
10.2.Personnel (Gov. Code 54957)
11.   RECOVENE IN OPEN SESSION:  ANNOUNCE CLOSED SESSION ACTIONS
12.   ADJOURNMENT 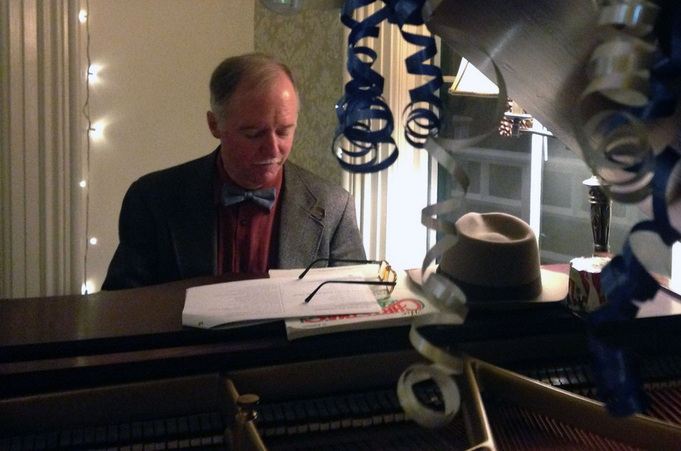