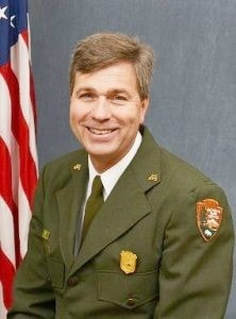 ​WASHINGTON, DC — A new superintendent will soon take over the leadership of Yosemite National Park. Today, U.S. Secretary of the Interior Ryan Zinke announced that he has selected Michael T. (Mike) Reynolds to be the superintendent of Yosemite.

Reynolds, a 31-year NPS veteran and a third-generation NPS employee, grew up in Yosemite and later returned to the park as a resource manager, planner and division chief.

Reynolds has served as the deputy director for operations of the NPS since 2016, and spent the majority of his tenure serving as NPS acting director. As Yosemite National Park superintendent he will oversee one of the nation’s oldest and most iconic national parks.

“Mike did an incredible job stewarding our parks through 2017,” said Secretary Zinke. “His leadership helping me combat sexual harassment and discrimination in the service as well as his big-thinking ideas to address the maintenance backlog is very much appreciated. I have all the trust in the world that Mike will bring his years of experience in field and in management to Yosemite.”

“When I think about my family’s history in Yosemite, this feels like coming home—it’s an incredible honor that I take very seriously,” said Reynolds. “Times have changed since my grandparents served as 40-year concession employees in the park. However, we should still provide world-class service and experience to visitors in ways that sustain Yosemite into the next century. My focus will be on that, and on supporting our employees, repairing infrastructure and working closely with the communities and people around and associated with the park.”
​
Reynolds will begin his assignment at Yosemite National Park in early March. 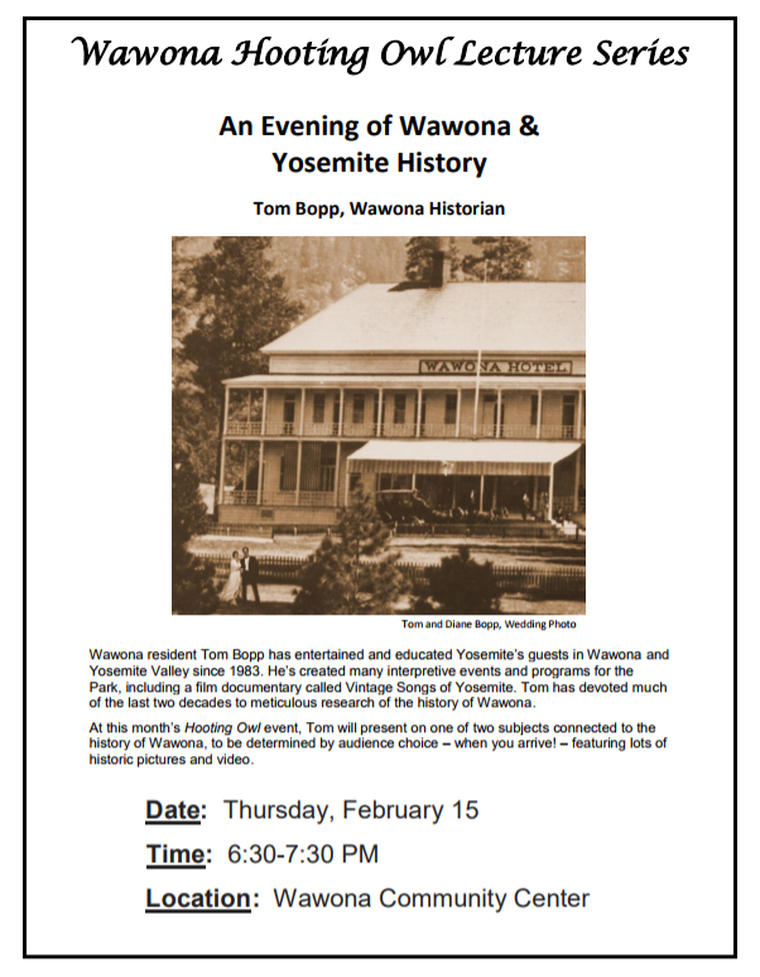 ​Yoga has been moved to Wednesday at 6pm at the Redwoods for THIS WEEK ONLY.  Snowball is Friday at the Majestic, so there was a conflict.

Next week, yoga will be back to Fridays.  6pm at the Redwoods. 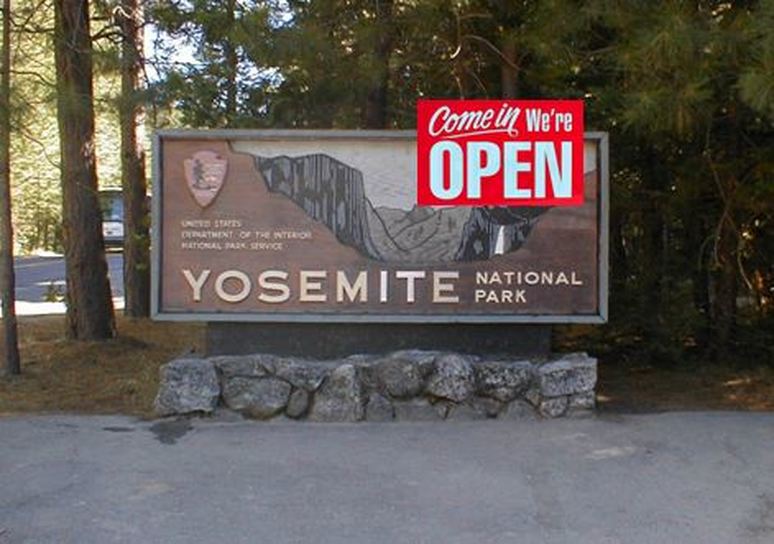 ​The federal government on Friday shut down all non-essential functions starting Saturday morning. Despite the government shutdown, Yosemite’s gates and roads will remain open along with all lodging, restaurants, retail, shuttle buses, and the ice skating rink.

United States Congressman Tom McClintock’s released a statement regarding the government shutdown and its relation to Yosemite’s gateway communities and Yosemite visitors:

“Entrances to the parks will remain open and businesses within the parks may continue to operate under contingency plans now being finalized with the Park Service.  The medical clinic at Yosemite Valley will remain open and public safety personnel will remain on duty.  Reservations will continue to be honored at concession venues and the parks will be administered with the objective of causing the least inconvenience and discomfort to park visitors.”
For more information, please read the official release.

Despite conflicting reports, entrances to Yosemite will remain open, and businesses within the park will continue to operate. We’re looking forward to seeing you!

National Parks Could Stay Open Even If Government Shuts Down 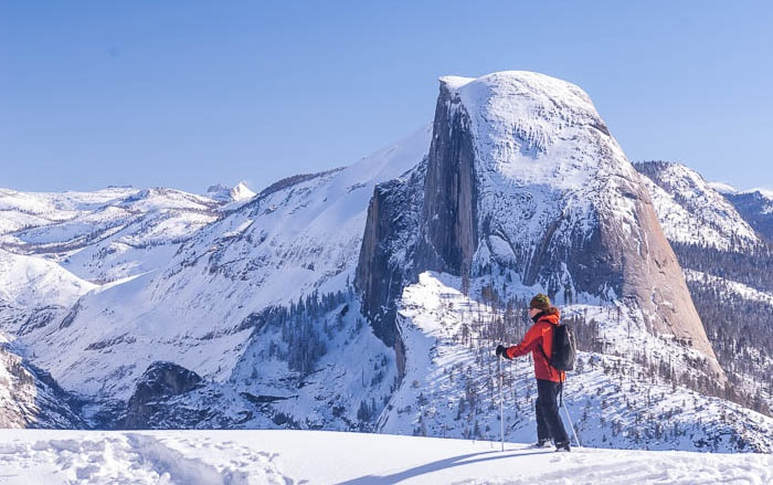 By Lisa Rein and Juliet Eilperin January 18 at 7:50 - The Washington Post.

PM As a Friday deadline for a government shutdown approached, the government began setting plans in motion to halt scores of federal functions — even as it scrambled to keep hundreds of national parks and monuments open to the public to minimize anger over the disruption of services.

With government funding set to expire at midnight Friday, Interior Secretary Ryan Zinke was still working out details of a plan to permit the parks to function without rangers or other staff on site. With many parks in peak season, drawing thousands of visitors, the lack of finality was causing wide confusion across the park system. Officials from three sites said Thursday they were unsure how to proceed.

“We don’t have a plan yet,” said Abby Wines, spokeswoman for Death Valley National Park in California, which is seeing 80,000 visitors a month. “We just got a memo about this yesterday. Today’s the first day we’re seriously thinking about this.”

The shuttering of iconic parks proved to be a political flash point during government shutdowns in 1995 and 2013. On both occasions, Republicans controlled Congress and a Democratic president sat in the White House; both times, Republicans shouldered much of the blame for ruining people’s vacations.

This time, White House budget director Mick Mulvaney proposed keeping the parks open in the event of a budget impasse, according to an administration official who spoke on the condition of anonymity to discuss internal deliberations. That triggered discussions between top officials at the Interior Department and the Park Service and administration lawyers to determine whether and how to preserve public access to national parks.

Mulvaney pledged in an interview on Fox Business this week that a shutdown “would look very different under a Republican administration than it would under a Democrat.” He cited national monuments, which he said would stay open.
Late Thursday, as lawmakers labored to forge an agreement to avert a shutdown, administration officials said they were laying plans to keep many parks open for hiking, wildlife watching, snowshoeing and cross-country skiing.

“We fully expect the government to remain open. However, in the event of a shutdown, National Parks and other public lands will remain as accessible as possible while still following all applicable laws and procedures,” Interior spokeswoman Heather Swift said in an email. “Visitors who come to our nation’s capital will find war memorials and open-air parks open to the public.”

The department “will still allow limited access wherever possible” to national parks, refuges and other public lands, Swift added, including on roads that have been cleared of snow. “Wilderness type restrooms . . . will remain open,” too, she wrote. But “services that require staffing and maintenance such as campgrounds, full service restrooms, and concessions will not be operating.”

Open gates at national parks and monuments would stand in stark contrast to the last government shutdown, in 2013. The Obama administration erected barricades around popular sites to mark the closures, which quickly became potent symbols of government dysfunction. In Washington, busloads of elderly veterans, many of them in wheelchairs, angrily pushed aside barricades to tour the World War II Memorial on the Mall.

But she cautioned that the plan was still in flux: “The Solicitor’s Office is still reviewing and continues to make additional suggestions and edits, so this is probably not the last version you will see.”

Experts on the national park system said providing access when the parks are not adequately staffed could pose serious risks to tourists as well as to the parks themselves. Park staff provides safety guidance to visitors, including which trails are safe and what sort of equipment is needed to traverse them.

Theresa Pierno, president of the National Parks Conservation Association, said in an email that “the vague direction” superintendents are receiving from headquarters puts them “in an impossible situation.”

“They’ll be forced to make on-the-fly decisions about what areas of national parks warrant protection. And then they’ll need to determine how to protect those places with virtually no staff,” she said, adding that the policy “raises some serious questions not only about what resources get protected, but also the legality of this partial closure scenario.”

John Czwartacki, a spokesman for the White House budget office, said it makes sense that the administration is not going to use shuttered parks as political ammunition the way Obama did five years ago.

“There is no desire to weaponize closing of public parks or monuments for partisan, political reasons,” he said.

In the event of a shutdown, different parks may adopt different policies, according to officials, who spoke on the condition of anonymity to discuss private deliberations. Some free-standing gift shops could remain open, while those in parks’ visitor centers would have to close because there would be no park staff to let workers in.

Easily accessible scenic areas would stay open, they said, while isolated backcountry trails could close because of safety risks and fewer staff members in position to respond in emergencies.

A privately run lodge could stay open, so long as it did not rely on the Park Service for snow and trash removal, the officials said. And visitors could be encouraged to bring their own grocery bags to collect trash.
The story must be told.

Acting Glacier National Park Superintendent Eric Smith said visitors would be able to drive along the eight miles of the park that are open, and they would be able to snowshoe and cross-country ski. The visitor center, lodges and gift shops would be closed, but toilets would be accessible, and two law-enforcement rangers would be on duty to respond to emergencies.
“People who have driven a long way to see the scenery won’t be completely disappointed,” Smith said. 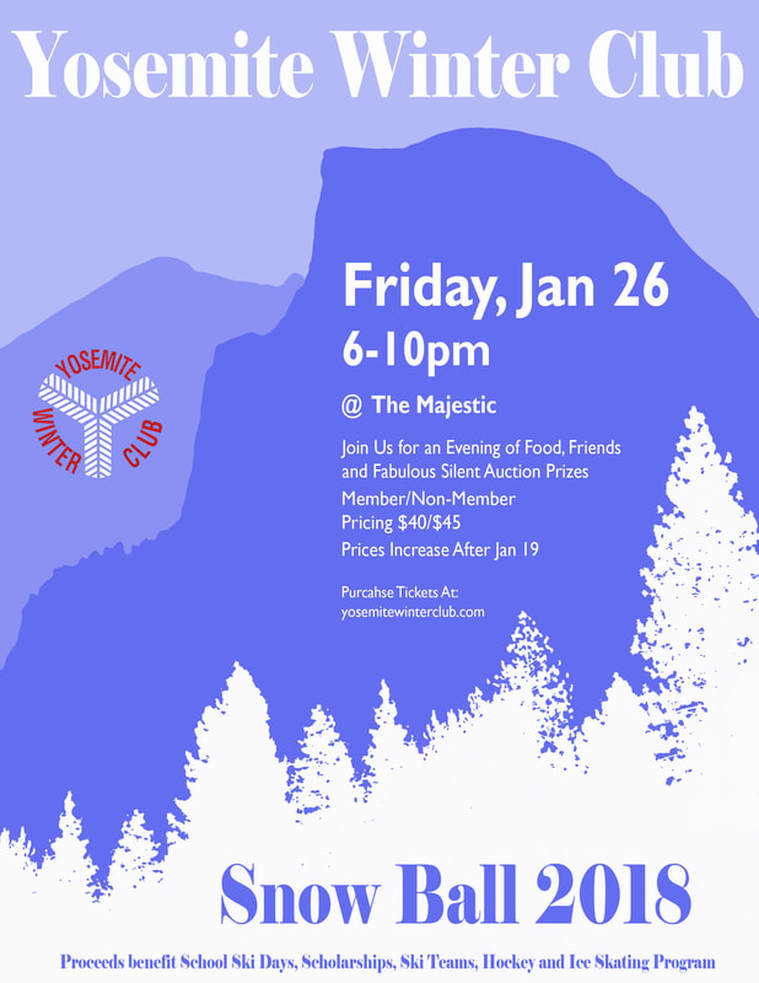 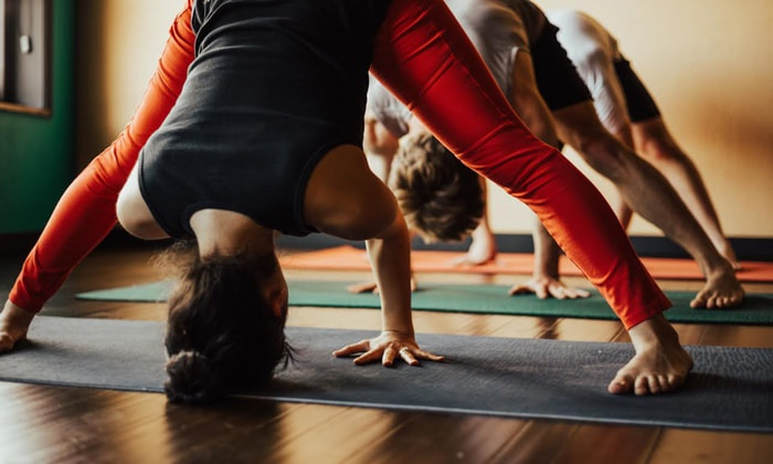 ​We are going to start having a weekly yoga in Wawona, graciously hosted by the Redwoods (thanks to Janine).

WHAT:  Yoga for all ages and abilities, led by Christy (if we see success with weekly yoga attendance, we will look at getting a professional instructor in)

WHEN:  Weekly starting Friday, January 19th from 6-7pm; day of the week may change, so check FB and WawonaNews for most up to date information

DETAILS:  This will be open to the community, including residents, employees and visitors.  Suggested donation range $1 - $15 per class.  Donations will be used to buy supplies (blocks, mats, blankets, straps, instructional videos).  Eventually this will be used to pay for a professional instructor.

BRING:  yoga mat (contact me if you need one), blanket, straps or blocks (optional), water bottle

I HAVE NEVER DONE YOGA!  OR AT LEAST NOT IN AWHILE:  Don't worry!  These classes will be tailored to all abilities.  We can modify based on your needs.

And check out and join our new Wawona Community Facebook group:
https://www.facebook.com/groups/wawonacommunity

The Wawona News website now has a "subsidiary" Facebook page thanks to the efforts of Christy Hurlburt and James Cox. Click on the image above or the permanent link on the top menu to join the Wawona  Community Facebook Page.
Wawona News Wawona News