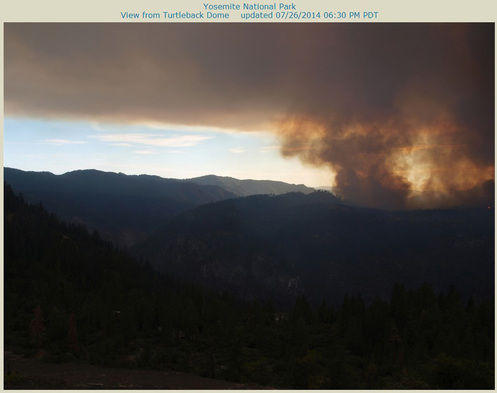 July 26, 2014
Evacuations are in place for the community of Foresta as firefighters battle a wildfire outside Yosemite National Park.

The fire started Saturday around 4:30 p.m. and now covers  approximately 500 acres.
It is burning in the Merced Canyon, and has been named the “El Portal Fire.”

Many resources have been ordered to attack the fire:  ground crews, air craft, and helicopters.  More resources will arrive throughout the evening. 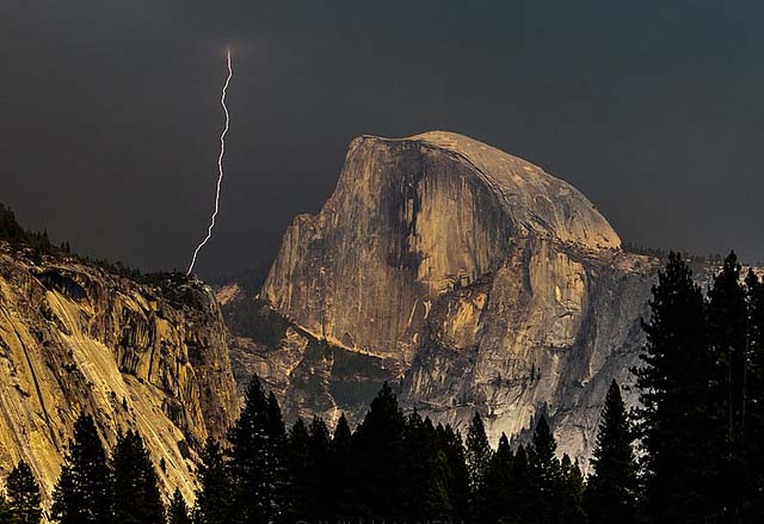 Since July 14, Yosemite National Park has experienced over 3,000 lightning strikes with more than 21 fire starts. Multiple thunderstorms, accompanied by rain, have put out or temporarily slowed activity and growth. Most fires are between 8000’ and 9000’ elevation.  They are small, creeping and smoldering surface fires or single logs less than 1/10 of an acre and are showing minimal activity. Of 1,004 fires above 8,000’ since 1930, 941 never got to be 10 acres.  Most of these fires have few values at risk an pose little threat to people or park infrastructure.   As the weather warms and fuels dry out it is likely other fires will be found. All fires are being monitored by fire crews.

Fires Managed for Multiple Objectives:  Yosemite fire management is developing strategies for these fires and depending on risk assessment; most of these current fires will be naturally extinguished.  Fire crews will utilize natural barriers of granite, streams or open ground to manage fires. The Fire Management Plan allows the park to manage any fire outside of the suppression unit.

Dark Hole:  (37 48.323 x 119 36.786, Mariposa Co. 7400’, July 16.)  This fire has grown to approximately 11 acres and will be managed for multiple objectives. It is within a red fir forest and it is the largest and most active of all the park-wide fires.  It is located near the Yosemite Creek trail about a mile south of the Yosemite Creek campground.  It is in an area of past lightning fires, although the immediate area has no fire history.  Smoke is visible from Tioga Road east of Yosemite Creek, and from Sentinel Dome and Glacier Point.  Hazards may include smoky conditions and poor visibility, rolling rocks and logs.  There is one trail closure: The Lukens trail to Yosemite Creek trail is closed between Tioga Road and Yosemite Creek Campground Road and Trail.  The Yosemite Creek Tail remains open.  To avoid smoke and other hazards, hikers are urged to pass through the area quickly. 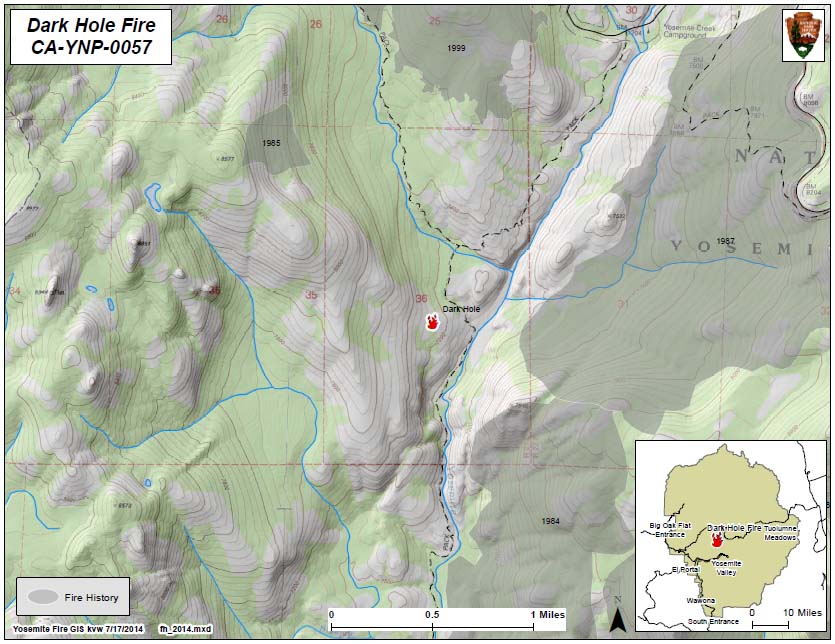 Lightning Fires Identified for Suppression:  These fires either at high elevation or threatened communities. These fires will continue to be patrolled by fire crews:

Hoover (37 39.143 x 119 29.018 – Mariposa Co. 8030’, July 20) This fire is south of Glacier Point and in the Illilouette basin. It is within the 2001 Hoover Fire footprint.  It is in heavy brush fields.  Yosemite Helitack crews have lined and contained the creeping and smoldering fire and it will be suppressed. 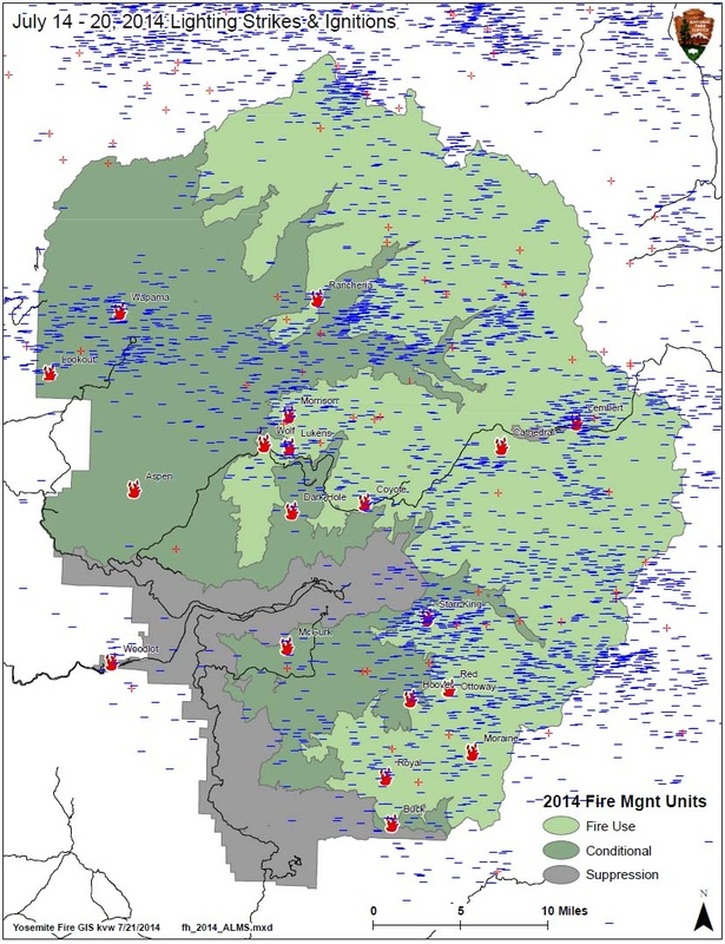 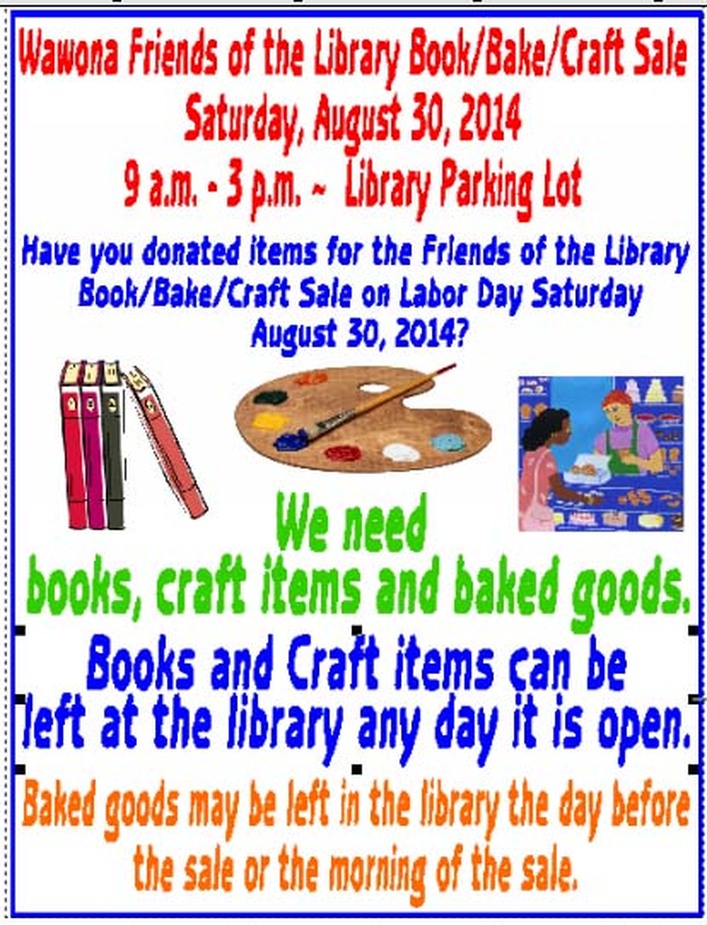 Board of Directors Meeting

CALL TO ORDER at 6pm.

PUBLIC COMMENTS ON NON-AGENDA ITEMS.  Note: The public may speak on any item not on the printed agenda.  No action may be taken by the Board.  The public will also be given the opportunity to comment before or during the Board’s consideration of items. 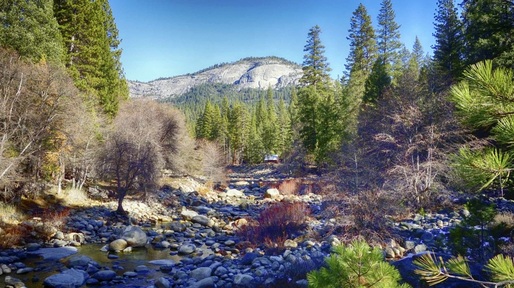 Dear Yosemite Community: Yosemite is now entering its third consecutive year of drought. After an exceptionally dry winter and spring, water in the South Fork Merced and Tuolumne rivers are continuing to drop at exceptionally fast rates and our driest and busiest months are still to come. The South Fork has now dropped to 2.78 CFS, and we are implementing critical water conservation measures.

Past droughts have shown domestic water supply in Wawona and Tuolumne to be especially vulnerable. Previous water conservation efforts in Wawona have had significant effects on water usage. Thanks to water conservation effort water use in Wawona dropped daily average of 77,523 gallons in June 2013 to 69,596 gallons in June 2014.  Although Wawona and Tuolumne are the most highly impacted communities by the drought, the severity and duration of this drought makes water usage a responsibility for every member of Yosemite.

*Ensure faucets, toilet, pipes, and other water sources do not leak.
*Take shorter showers and install water-saving shower heads or flow restrictors.
*Don’t let the water run when brushing your teeth or shaving, use a wash basin.
*Don’t let the faucet run while preparing food or cleaning, and use your automatic washing-machine only for full loads.
*Use a broom to clean driveways, sidewalks, and steps, and don’t run the hose while washing your car.
Water your lawn only when it needs it, do so when cool and avoid watering on windy days.

For a complete list of conservation measures, refer to appendix B in the Wawona Water Conservation Plan. If you have any questions, contact District Ranger Eric Scott at: 209-375-9520. We thank you for your continued attention to this very timely and important issue. We will continue to update you as we learn new information about this drought and how to best protect the water ecosystems of Yosemite National Park.
On behalf of the Executive Leadership Team,
Don Neubacher 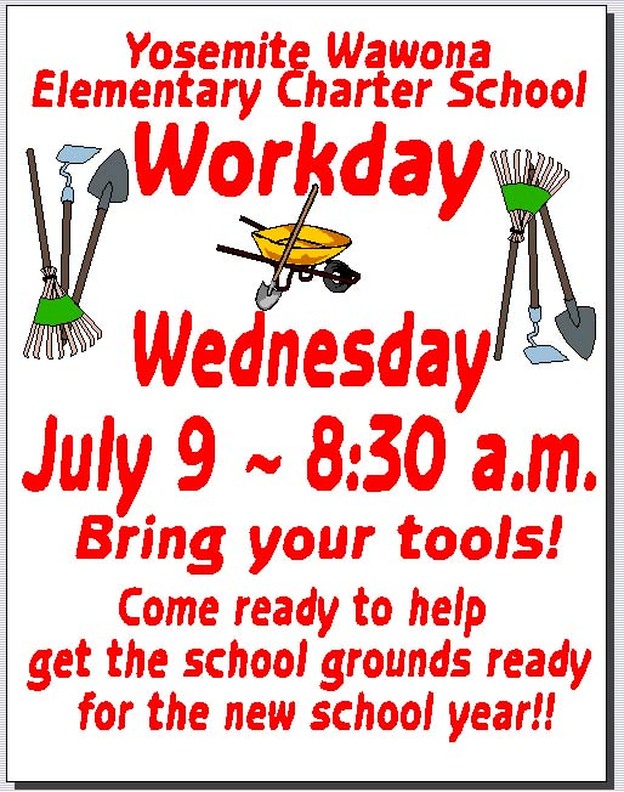 Board of Directors Meeting
Monday July, 2014


Call to Order 6 p.m.
Introductions
Public comments on non-agenda items.  Note; The public may speak on any item not on the printed agenda.  No action may be taken by the Committee.  The public will also be given the opportunity to comment before or during the committee’s consideration of items.
Approval of June 29, 2014 Meeting Minutes
President’s Report
Financial Report
Board Reports
Discussions/Action Items
Authorize official name change
Recycling Program
Insurance Resolution
Next meeting; date and agenda
Adjournment

In compliance with the American Disabilities Act, if you need special assistance to participate in this meeting, please contact the Wawona School at 209-375-6383. 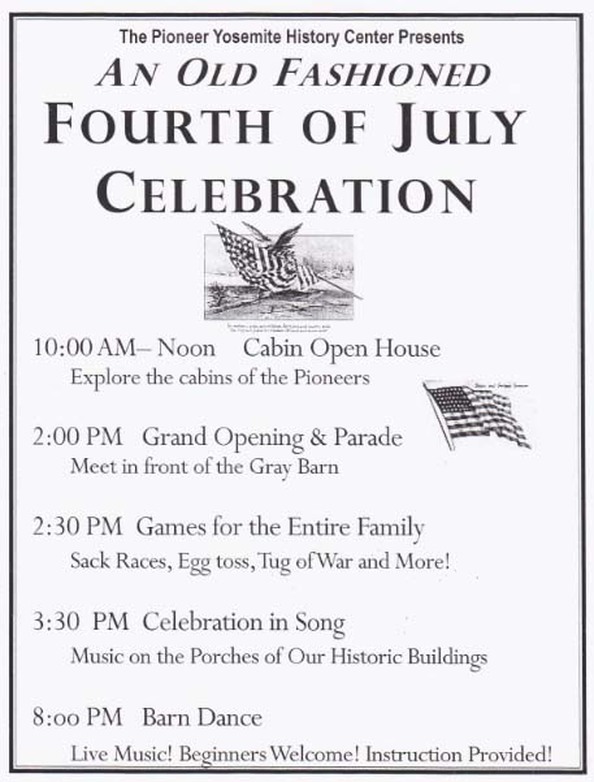 On June 30, 1864, President Abraham Lincoln took time out from the trauma and bloodshed of the Civil War to sign legislation to preserve two parcels of land in Mariposa County, California. Known as the Yosemite Grant, it didn’t just save the land from commercial development; it also laid the foundation for what we know as national parks today.

“Setting aside special places for all people for all time had never been done before,” said Mike Tollefson, president of the Yosemite Conservancy, the park’s philanthropic partner. “It launched the national park idea, not only in this country but worldwide.”

On Monday, the park will celebrate that 150-year legacy with a full schedule of events, including a heritage fair, museum exhibits and history hikes with “Galen Clark,” an early settler and the park’s first ranger. Bringing the festivities full circle will be a groundbreaking ceremony for the restoration of the park’s Mariposa Grove, which along with Yosemite Valley was originally preserved 150 years ago. 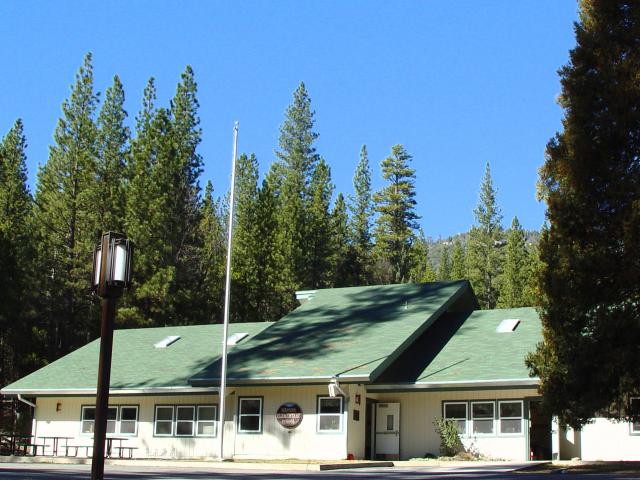 Board of Directors Meeting

3.    Public comments on non-agenda items.  Note; The public may speak on any item not on the printed agenda.  No action may be taken by the Committee.  The public will also be given the opportunity to comment before or during the committee’s consideration of items.

a.    Approve Bylaws and Conflict of Interest

b.    Approve Articles of Incorporation

In compliance with the American Disabilities Act, if you need special assistance to participate in this meeting, please contact the Wawona School at 209-375-6383. 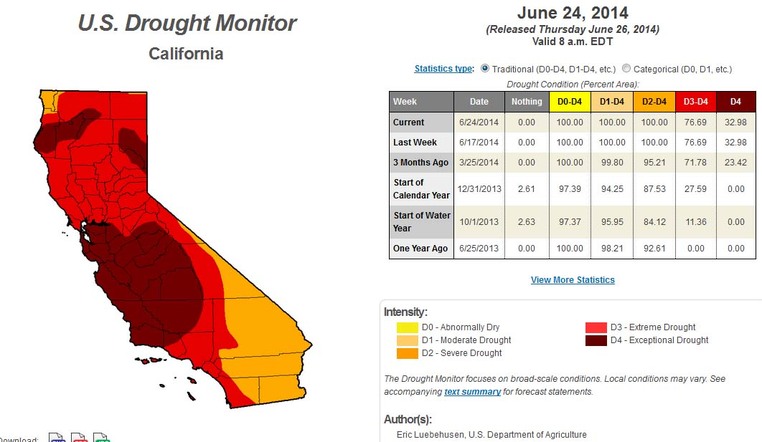 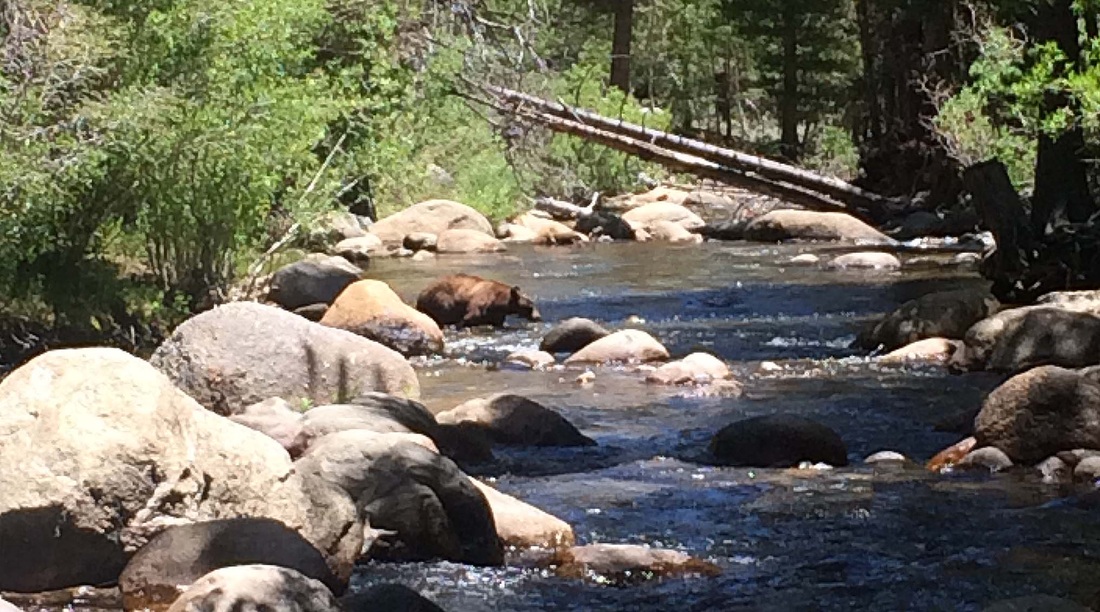 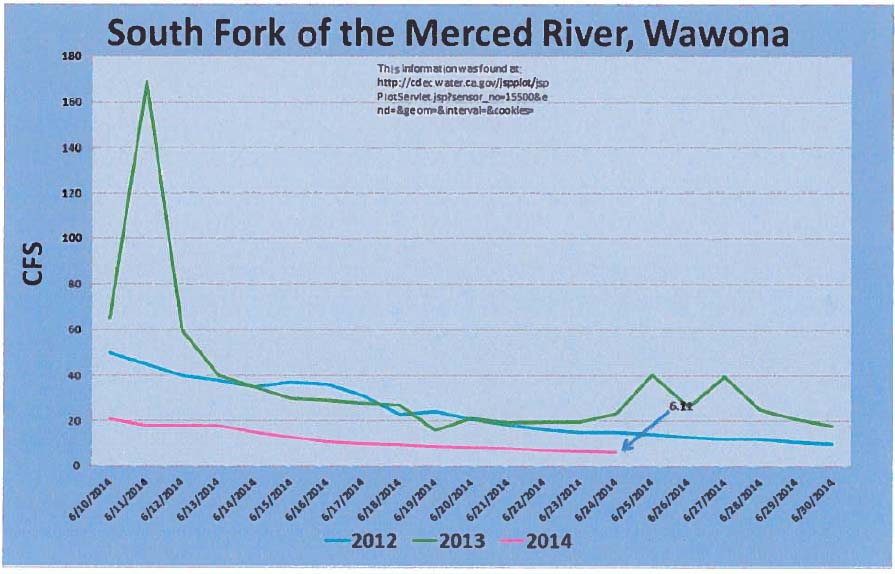 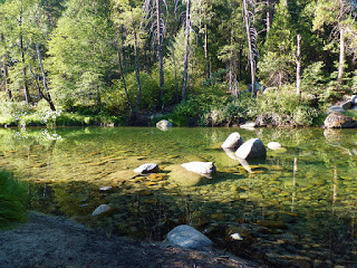 This winter and spring have been exceptionally mild with regard to rain and snowfall. Like 2012 and 2013, 2014 will likely go down as one of the driest years on record for Yosemite National Park. As a result, water levels in the rivers and streams are lowfor June. Current data shows that the water level in the South Fork Merced River is dropping quickly and there is no significant precipitation forecasted in the near future.  Water conservation measures are mandatory when flow rates drop below 6 cubic feet per second (CFS) in the South Fork Merced.

As of June 23, the river-gauge has measured below 7 CFS (see chart below) which means that the Wawona community will soon need to implement conservation measures. We anticipate that the South Fork Merced will remain below these levels until significant rainfall occurs. We ask that residents and employees begin implementing the guidance and direction from water conservation plan. There is also a list of recommended measures below.  Attentive conservation measures are our best approach to ensure that water is available where needed for safety and health purposes, as well as protection of park resources.

We ask that you consider your water consumption in the coming days and weeks and look for ways to conserve it. We will continue to share more information about the water levels and conservation practices as necessary.  We thank you for your attention and support as we address this important community issue. Through our combined efforts, we can work to maintain a sufficient water supply while still preserving the ecosystems of Yosemite National Park. (J. Friesen-McCabe)

Two men jogging on the Matcheetawin Discovey Trails near Fort McMurray, Alta., earlier this month got quite a scare after a close encounter with a black bear.

Bruce Allan posted a video of the encounter on YouTube.

In the video, which was filmed on June 5, the bear follows the joggers for several minutes, coming extremely close but never attacking.

"You have to let us go," urged one of the people in the video.

The bear eventually appeared to lose interest and the joggers sprinted to their vehicle and out of harms way.