Rumor has it that there are 230 species of birds and 80 species of mammals in Yosemite National Park. After living here for 18-plus months, I'd like to ask, "Exactly where?" Because while it's true that on any given day, I might see mule deer, gray squirrels, and an occasional coyote, everything else seems to have headed for the hills — or at least that's the theory. Naturalists working in the park claim that in a space the size of Rhode Island, the animals can't be bothered hanging out around people. According to them, except for black bears looking for easy pickings, most of the animals live in remote areas where there's little chance of human interaction. To which I say, "Hogwash." In the past 18 months, I've seen plenty of wildlife. It's just that none of it has been inside the park.

Ask me where you should go for the best animal viewing and I'd send you off to hang out on Highway 41. Going into Fresno about once a week, I've become fairly obsessed with the red-tailed hawks that seem to sit on every lamppost heading out of town. The farmland may be disappearing but their presence — with their nests stuck onto telephone poles just yards from the road — seems to say, this is still our country.

Same for the golden eagles. The first one I saw was a fledgling hiding in the grass not ten feet from my car. The first one my husband saw was on his way down to Oakhurst from the park. As most readers know, Yosemite is not my husband's favorite place. That he's here is a testament to his devotion to his daughter and our love for her park school. But one day, when his feelings of isolation were at their height, a golden eagle flew along with him as he made his way down the hill, holding itself at window height for about 100 yards. I, at least, took this as a cosmic sign that we were in the right place. On that same road we've seen beaver, deer, and bobcats. Then a few weeks ago, right outside of Oakhurst, I hit the animal jackpot. A huge, enormous bear ran across the road directly in front of my car. I was far enough away to miss it, but close enough to gasp with delight and grab the arm of my passenger while yelling, "A bear. A bear. My first bear."

Now I know there are bears in Yosemite. I know this because when you travel the roads of the park, there are yellow signs painted with red bears and the message "Speed kills." I doubt many visitors to Yosemite know these signs mark the place where a bear was taken out by a car. The signs appear fairly frequently along the roadside, so while I haven't actually seen a bear in the park, I know they are here, along with mountain lions, which many of my neighbors have seen right in my neighborhood. So far, no viewings for me. I'm hoping to keep it that way (unless I'm in the safety of a car).

When Galen Clark became the first guardian of Yosemite in the 1860s, he wrote extensively about the abundance of game — beavers, raccoons, opossum, deer, bear, fox, coyote, mountain lions, and big horn sheep. I've seen several of these species in the backyard of my home in Los Angeles, but never here. To see them in the Sierras, take my advice: stake out a viewing spot along Highway 41.

In May 2009, while hiking in Yosemite National Park, long-time Los Angeles resident Jamie Simons turned to her husband and said, "I want to live here." Today she and her family have made the move to live for one year in Wawona, where her daughter attends the one-room schoolhouse, Jamie writes, and her husband longs for noise, fast food, people, and the city. (Though he's learning to appreciate mountain life.) 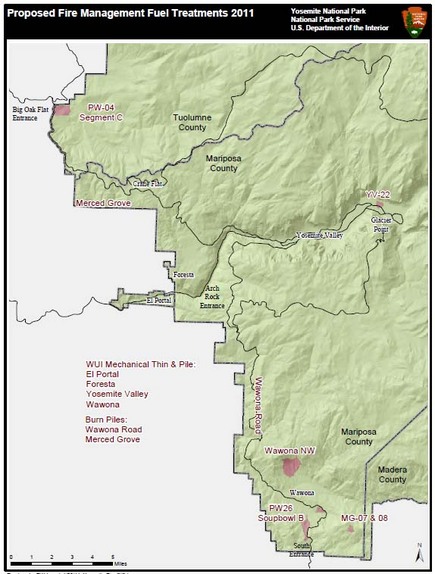 Welcome to the 2011 early fire season report - although fire season has not been declared as yet.  The linked map and timeline list the proposed prescribed fire plan for the park in 2011.  Each project will depend on the weather, snow melt as to when the fire units  each come into burn prescription.

The above projects all remain tentative to dates.  We will  advise each community near specific projects a few weeks prior to the expected start date.

The weather has remained cool through April, and has put the first project back a few weeks - Hodgdon (PW-04) at the earliest, will be mid June.  The foothills are experiencing vegetation fires from an overgrowth of cured grasses and storm damaged trees and limbs, which is keeping  Cal-Fire and CA county fire agencies active.  Nationally the southwest continues to experience drought conditions with fires burring.  A limited number of park fire resources have been sent to assist the fire suppression efforts.

No date as yet has been set for the start of fire season, but as a reminder it is not too early to begin the vegetation and pine needle clean up around properties. Another reminder is that cabin inspections will begin June 10.

The last snow pack survey into the Sierras was conducted this last
week and in many of the survey sites well above normal percentages of snow and water content remain.  http://www.water.ca.gov/

Year in Yosemite: Come On Down In the summer, hordes of people visit Yosemite National Park. The campgrounds are full (many require reservations a full year in advance), the restaurants are crowded, the Valley floor is a virtual parking lot as people crawl along in traffic. I have just two words to say to all these people….come now. Come when the weather is Goldilocks-perfect — not too hot, not too cold, but just right.

Come now when the waterfalls are at their most spectacular, crashing and careening down the steep granite walls, raising dazzling showers of water droplets that turn to rainbows in the sun — because they'll be mere drips by late summer. Come now when it's possible to drive without feeling like you're sitting on a freeway and the park is coming alive after hibernating from a winter of snow and ice. Come now when the foothills surrounding the park are emerald green with new grasses and masses of wildflowers cover the hills and valleys, showing off their sweet, gentle freshness like a debutante at a coming out ball.

If I sound exuberant, I can't help myself. I'm one of those people who love to decorate my home for my guests. Imagine how I must feel living in a place where Mother Nature was the decorator and she got everything right. No need to move even a rock to make it picture perfect. But apparently she doesn't agree with me as whole hillsides regularly come tumbling down, rearranging her design. As someone who rearranges furniture in the middle of the night, I understand her urge for change.

We've been visiting family for the past week, my daughter's spring vacation coinciding with my dad's 86th birthday. When we drove back into Yosemite last night, I found myself taking in deep breaths of fresh air. I was so happy to be home that I walked the dirt road into the village even though reports of mountain lions in our part of Wawona give me the willies when I'm walking alone. I still marvel that in a year and a half there hasn't been a single time that I've driven the final curve into Wawona to see the golf course and its meadows lying out below me that I haven't thanked the heavens that I live here. Now that tourist season is gearing up, I want to stop each car on its way to the Valley and say, "You're so lucky. You can't believe the beauty that awaits you." Unlike many who live year round in the park, I never tire of the tourists. There's too much of the hostess in me. If I could, I'd stop each car and tell them all of my "must-sees." Since I can't, and since most people won't be coming now, I can only offer this.

If you can't make it here until summer, hit the trails in Yosemite Valley after 4 pm -- they are usually pretty empty by then. Drive around the park at night. Tunnel View by moonlight is a view you’re likely to have to yourself. Think Glacier Point Road. Many of its hikes — Taft Point, Sentinel Dome and Dewey Point in particular — offer breathtaking views of the park without the crowds. And Wawona fan that I am, don’t miss the locals favorite Saturday night hangout—the barbeque dinner on the lawn of the Wawona Hotel, followed by the barn dance in the Gray Barn or Tom Bopp playing the piano inside the hotel (humor, local history and talent all in one man). We'll be there. But my main advice for enjoying Yosemite? Come now.

In May 2009, while hiking in Yosemite National Park, long-time Los Angeles resident Jamie Simons turned to her husband and said, "I want to live here." Today she and her family have made the move to live for one year in Wawona, where her daughter attends the one-room schoolhouse, Jamie writes, and her husband longs for noise, fast food, people, and the city. (Though he's learning to appreciate mountain life.) 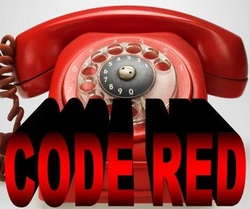 The Mariposa County Sheriff’s Office has contracted with Emergency Communications Network to license its CodeRED high-speed notification solution. Please visit the CodeRED Website and enter your phone numbers(s) and address.

Mariposa County is using the CodeRed System now instead of the Reverse 911 system.  In addition to your Wawona phone number, please list your cell phone number so you will be notified when you are not in residence

Fill out the appropriate information and submit. 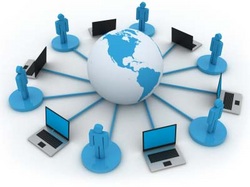 Signing up for the webinars is easy. Go to yose.webex.com, click Register next to the webinar title to sign up for the workshops of your choosing.  You will receive an email confirming your registration.

On the day of the webinar you will receive a reminder email approximately  one hour before the start of the webinar. The email will contain a link to join the webinar or you may go directly to yose.webex.com.

Try it out by signing up for the Merced River Plan Spring Workshops! 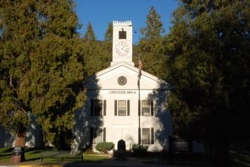 For the past several weeks Staff has been working to expand the information available to the public regarding Board meetings. Although there is still some fine tuning to be done, the Board agenda posted today now includes a link to back up materials. You can check it out at: http://www.mariposacounty.org/index.aspx?nid=257 The PDF that opens includes links to back up materials.

At the present time we don't plan on sending out an official announcement or notice. We want to work out the bugs. If you have any comments please get in touch with me. 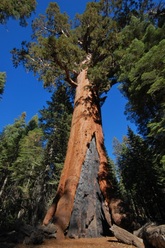 
The Mariposa Grove Road in Yosemite National Park will open for the season Friday, April 15, 2011 at 9:00 a.m.  The road provides visitor access to the Mariposa Grove of Big Trees, the largest grove of Giant Sequoia in Yosemite National Park. The road is located near the park’s South Entrance, on Highway 41. Some commercial services within the Mariposa Grove will open later in the day. Additionally, tram tours are slated to begin operating over the next several weeks. There are vault toilets available in the parking area. Visitors are urged to drive with caution as snow and ice may still be present on the road. The Mariposa Grove Road may intermittently close due to weather conditions. (S. Gediman - 4/15)
Wawona News